Back in May/June 1986, the New Musical Express released one of their regular mail-order cassettes.

Reflecting the latest trends in Indie music, C86 was a 22-track cassette which was inspired by the NME’s C81 tape from half a decade earlier. Aside from a few name bands (The Pastels, Primal Scream, the Wedding Present, the Mighty Lemon Drops), most acts were relatively unknown beyond the back pages & gig listings of the weekly music press. A few hadn’t even issued a record! C86 slowly but surely became the NME’s best-selling ever compilation, selling an estimated 40,000 copies & eventually being reissued on LP and cassette by Rough Trade the following year. C86 prompted a week of shows at the ICA & would come to embody a whole musical style & era. This deluxe expanded edition of the original C86 cassette adds some 50 bonus tracks. 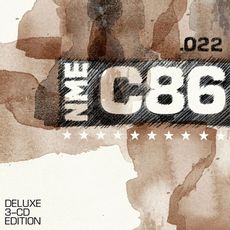 15.    I Hate Nerys Hughes (From the Heart)
Half Man Half Biscuit

4.    Splashing Along
Garon, Jesse & the Desperadoes

11.    Worm in My Brain
Weather Prophets

12.    Meet Me on Tuesdays
Brilliant Corners

10.    Spider Psychiatry
King of the Slums

17.    Mesmerized
Pop Will Eat Itself