the former Rilo Kiley frontwoman’s 3rd solo album is swathed in a rootsy, golden glow & finds the always relatable songwriter at her sharp-witted best, singing about her recent experiences with honesty & incisiveness.

the warm sounds comes courtesy of Lewis & the artists she chose to produce various tracks, including Ryan Adams (who, alongside Mike Viola, produced all but 3 of the tracks), Beck & Lewis’ longtime collaborator Johnathan Rice. "feels more like a stylistic run-through many of her old band’s sonic touchpoints.....In particular, there’s numerous callbacks to 'Under the Blacklight', their Fleetwood Mac-inspired final album.....there isn’t a weak track on the album - just varying degrees of excellence" 8/10 - thelineofbestfit. 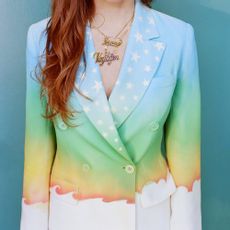