With the addition of Pinkus & Leary it feels as though a very fundamental shift has occurred, taking the band's sound in some very different & interesting, new directions. Although the album's opener, ‘Bride of Crankenstein,’ feels like classic Melvins with its constant assault of crunchy riffs & grimy production, ‘Hold It In’ enjoys a radical change in tone on ‘You Can Make Me Wait,’ a laid-back rocker with a groovy, slacker vibe that leaves it feeling more like Ween than the Melvins. Meanwhile, ‘Eyes on You’ finds the band doing a freaked-out impression of a straight-ahead blues-rock number, pairing a rowdy, stomping beat (with handclaps & all) with oddly paranoid vocals. 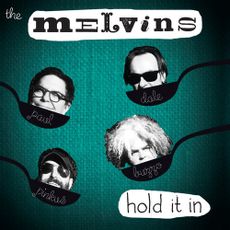