Tears for Fears perfectly captured the zeitgeist of the mid-'80s while impossibly managing to also create a dreamy, timeless pop classic - one of the finest statements of the decade.

If 'The Hurting' was mental anguish, 'Songs from the Big Chair' marks the progression towards emotional healing, a particularly bold sort of catharsis culled from Roland Orzabal & Curt Smith's shared attraction to primal scream therapy. The album also heralded a dramatic maturation in the band's music, away from the synth-pop brand with which it was (unjustly) seared following the debut & towards a complex, enveloping pop sophistication. The songwriting of Orzabal, Smith & keyboardist Ian Stanley took a huge leap forward, drawing on reserves of palpable emotion and lovely, protracted melodies that draw just as much on soul and R&B music as they do on immediate pop hooks. 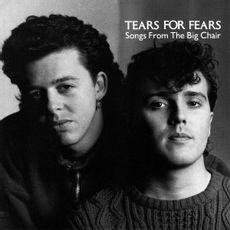