from the end of the 70s on, Style Scott emerged as one of the most high-profile & style-defining drummers of his time but in 2014, he was murdered in Jamaica, aged 58.

The work on 'Hard Food', the first album released by his Dub Syndicate since 'No Bed of Roses' in 2004, had just been completed. Dub Syndicate’s first studio album for 11 years, an event that was to be a joyous celebration with friends, has now become Style Scott’s legacy. Style's very own baby was Dub Syndicate, his "British Roots Radics" with whom he recorded more than 20 albums between 1982 & the present & In this project, Style's riddims fused with On-U-Sound's signature style & the music & vocals of African Head Charge, Akabu, Mikey Dread & Jeb Loy Nichols. Dub Syndicate explore abstract dub spaces & lush psychedelic landscapes & this record Features guest appearances from Lee Scratch Perry, Bunny Wailer & U Roy. 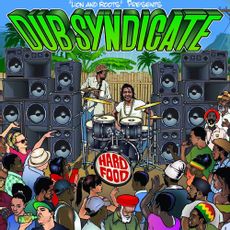