expansive guitar tones & looming organ drones - Portland, Oregon’s sonic explorers have always had a feeling of interplay between their impressionistic music & the dense forests that surround their hometown but here, they take that naturalistic inspiration to a new level.

The contrast between the openness of the massive Oregon sky and the denseness of the trees is echoed in ‘Wild Strawberries’. The album is thick with the lysergic leads that populated their earlier releases but the airiness of the woods has seeped into Nick Bindeman’s guitar playing, refining it & opening it up to new modal possibilities. recorded in a secluded cabin under the shadow of Mount Hood in Zigzag, OR, The lush atmosphere combined with a week long sequestration from the outside world had a pronounced impact on the music, which unfolds in a panoramic slow burn. yields vast rewards for those who spend time in its aural forest. 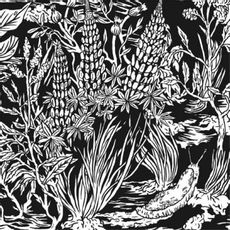