Produced by Jack Endino (known for his association with Seattle label Sub Pop and the grunge movement, having produced seminal albums of bands like Mudhoney, Soundgarden and Nirvana), 'Infrared Riding Hood' (1995) is the fifth and final album by the Seattle Grunge band Tad.

Although the album didn't enjoy the sales success of its genre's biggest rivals, this album is often regarded as Tad's best work. As a matter of fact, disaster struck for the band right after the album's release. Despite enthusiasm and hopes for a long awaited commercial breakthrough, their A&R representative at the label was fired. Within one week, all of her bands, including Tad, were dropped. The album sold poorly, having had very little promotion behind it and being carried by very few stores. This fact alone makes original copies of 'Infrared Riding Hood' quite rare to come by, making a reissue a welcome one for Grunge and Rock fans alike. 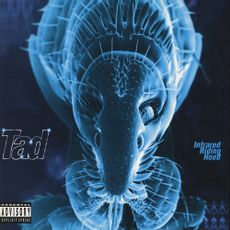