having delivered one of 2014's truly outstanding debuts, (a raucous musical cocktail of punk, folk & New Orleans blues), jack white invited benjamin to record at his renowned studio to capture the essence of his mind-blowing live sound.

"This record is the result of a year on the road. Its the best nights of my life & nights I would give anything to take back. It's sleeping in parking lots & sleeping with people for beds. It's eating bad food with good folks. It's makeups & breakups. It's missing home & never wanting to go back. Somehow I'm still here. Somehow the boys & I managed to keep things going. We learned from each other. We grew tighter as a band. The songs changed & on the night of September 24th we stepped into that building in Nashville to capture that. Thank you Mr. White & everyone at Third Man Records for welcoming me into your home and giving me a chance to share something I'm proud of, the live show" - Benjamin Booker. 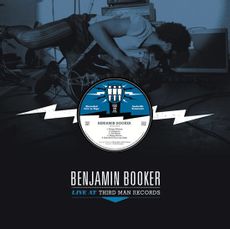