urgent, frenetic, jolty art-pop of the catchiest variety, the manchester group's 3rd album is more ambitious than ever but boy, do they deliver.

it's big, bold, colourful, confident but it also contains plenty of delicate moments & subtlety that balance out the stadium pop - this one's ready to soundtrack the summer of 2015 & way beyond for sure. frontman jonathan Higgs stated: "People are not going to know what the fuck to do with [the record], & I don't care cos I think it's awesome." Fortunately, he's not wrong! fans of foals, alt-j, wild beasts & django django will appreciate the kaleidoscopic energy on show here. "They can now justifiably join the pantheon of a particularly British type of pop eccentric, with Wild Beasts as their only equally able contemporaries" 8/10 - drowned in sound. 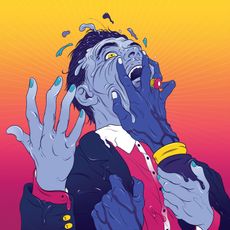