It’s not unusual for hip hop artists to immortalize something by sampling it, but few did so as extensively—or as effectively—as GZA in his use of snippets from Shogun Assassin on his 1995 album Liquid Swords. Though we know them as elder statesmen now, in the mid-90s The Wu-Tang Clan were the spookiest kids on the block, sharing an obsession with shaolin monks, B-movies, and soul-chillingly dark string samples. Released to the grindhouse film circuit in 1980, Shogun Assassin is a martial arts East-meets-West culture mashup. Recutting scenes from the swashbuckling Japanese series Lone Wolf And Cub for the British and American markets, the film sold on its brutal action and frequent decapitations. Producer RZA was a big fan and let the soundtrack shape his work on his bandmate’s solo LP. “[The album tells] the story of a shogun told through different narratives and scenarios. It’s not a theme but more like a thread throughout the album,” GZA has said. “While we were mastering the album, RZA asked the engineer to go out and get it and bring it back to us. That’s when I watched it. I loved it immediately and thought it fit with the album well.” The film’s soundtrack blends eastern melodies chiming out of futuristic synths, electronic beats, and bouncing disco bass lines introduced by a child’s ominous voiceover. It was neither Japanese nor authentic. It was, in fact, recorded and mixed at Icon Studios, Hollywood and composed and performed by W. Michael Lewis (of LA disco pioneers Rinder & Lewis) and Mark Lindsay, a man well known as the frontman of hit 1960s beat group Paul Revere & The Raiders. The combination produces results that are typical of neither and all the more intriguing for it. Never officially released on vinyl beyond a limited promotional pressing, this is your chance to own the highly sought after LP. It’s sure to be of interest to soundtrack buffs, Wu-Tang lovers, Tarantino aficionados (who may recall Shogun's homage in Kill Bill Vol. 2), and fans of experimental synth music. 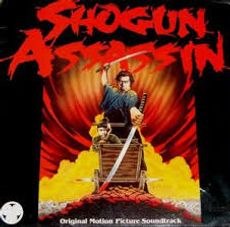