In Spring of 2014, We Are Scientists released 'TV en Français', their fourth studio album, to wide acclaim and a top-40 chart position in the UK. Now, after a year of global touring that shook loose the band’s preconceptions and rebuilt their very understanding of reality, comes 'TV en Français, Sous la Mer', a full-length re-envisioning of last year’s song cycle. Darker, more spacious, with distorted Rhodes and delayed Farfisas replacing electric guitars, …Sous la Mer (“under the sea”) draws the lyrics closer and casts them in a bluer light. The results, less danceable than those of the ancestor album, are lush enough to accompany recreational late-night bathing, but lively enough to soundtrack an aimless stroll through a foreign city. Available as 12” vinyl exclusively for Record Store Day; 8 tracks; download code included. 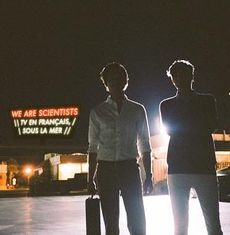