since 2008 Dope Body have been refining and redefining their own kind of hard rock music, a sound that has many tributaries flowing into it but one that is definitely coming through a group that could only happen now.

Dope Body are in a four-way conversation here, with drums, guitar, bass and vocals all pushing it around. Leaning into the future, mindlessly, just reacting, the jams of ‘Kunk’ are shimmering, alive with a simmering sizzle. Swirling jams that pound and float, cloud-like, associating segmentally like a naturally growing train of thought. ‘Kunk’ rolls forth with funk and flutter, plenty of riffs, stuttering and structure gleaming in the air. In the parade of sounds on display, the crunch of previous album ‘LIFER’’s straight-rock sound comes and goes, as does the impressionism of 2011’s ‘Nupping’ and the thick grind of ‘Natural History’ from 2012. While getting outside the straightjacket of songs, Dope Body still have an inherent way of ordering their chaos. 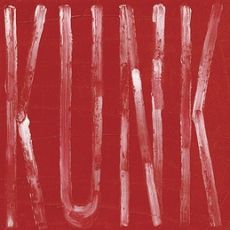