this minimalist tour de force is uniquely hypnotic & full of life - fans of julia holter's early work, the knife or julianna barwick need to get their ears around 'ears'.

Kinetic arpeggios of synths pulse, often buoying her graceful vocal mantras, while woodwinds breathe & flutter, emulating the wildlife Smith observed while growing up on the West Coast (she even studied recordings of slowed down bird calls prior to composing these pieces). Though some of her gestures echo the musical tropes used by early minimalist composers, the world she creates here is far more melodic & warm. if you're familiar with her astonishing previous album 'Euclid' (an album that prompted Dazed to call her "one of the most pioneering musicians in the world"), you'll no doubt notice her heavier use of vocals - on all but one song, her gently ecstatic swells of vocals emerge to soar over a dense jungle of synths & woodwinds. it's simply stunning! 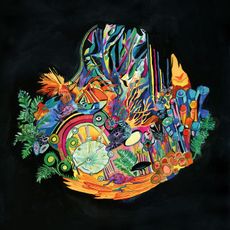