Sad And Dangerous, Mysterious And Exciting


Finally, an official release of this monolithic album.

· Formed in 1992 in Melbourne, Australia, this recording was the first official release by the band. It is a collection of pieces recorded on a 4 track recorder, with only 3 tracks working. · Mostly recorded in 1992, it was a way for the band to remember the tunes which were improvised in the first rehearsals. Initially a cassette only release sold at shows, it graduated to vinyl in 1994. · Stylistically it probably represents the band at their most playful and exploratory. Everything is fair game. · The majority of the album was recorded using a Realistic PZM microphone attached to a door, and the guitar and violin were DI’d. · The band never quite captured this sound again. · This release was overseen by Mick Turner, who trawled the archives for any worthy additions and unreleased gems. · This is indeed then the motherlode and part of Bella Union’s ongoing attempts to release the band’s entire back catalogue on vinyl, one Record Store Day at a time. · 180g green vinyl 2LP, includes download code. · Limited to 1000 copies. 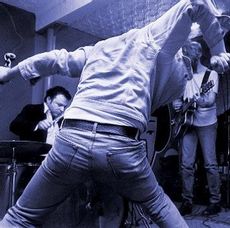