Out Of The Shades

RIYL Mike Cooper, Michael Chapman, Jackson C. Frank, Davey Graham, Bert Jansch, John Renbourn, Wizz Jones, or Clive Palmer. Available on virgin vinyl as a limited-edition 45 rpm 7”, with heavy-duty color jacket, restored original artwork, and notes. In 2014 Paradise of Bachelors reissued iconoclastic English-born, Rome-based folk and experimental music legend Mike Cooper’s classic triptych of early 1970s avant-folk-rock records—Trout Steel (1970) and Places I Know/The Machine Gun Co. with Mike Cooper (1971-72)—to widespread critical acclaim, including Best New Reissue recognition from Pitchfork and Rolling Stone. But Cooper sowed the seeds of his deconstructivist music five years earlier in his rare earliest recordings, until now scarcely known and never reissued—fitting fodder for PoB’s very first Record Store Day release. Named for The Shades, the Reading, UK folk club where he regularly performed, and which employed and housed guitar prodigy Derek Hall—who later played on Cooper’s 1969 debut LP Oh Really!?—the little-heard Out of the Shades EP was released in an extremely limited edition by local label Kennet Recordings in 1965 as KRS 766. The songs were recorded live to a single microphone in the kitchen/bathroom/former outhouse of Mike’s rambling Georgian apartment, on a portable Ferrograph reel-to-reel that the engineer otherwise used for “recording birds and trains.” By 1965 Mike had already progressed beyond and exhausted his interest in electric Chicago blues with his first band The Blues Committee. He was now a peer of British folk scene stalwarts like Davey Graham, Wizz Jones, Bert Jansch, and John Renbourn, hosting folk nights up to five nights a week at venerable Reading and London clubs like Les Cousins, The Latin Quarter, The Elephant, and The Shades, Hall’s home base. Cooper recalls his former partner’s artistry and skill with fondness and wonder 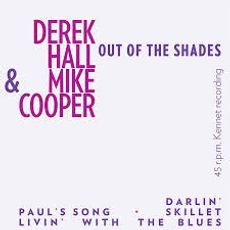