Pyramid / When The Poor Can Reach The Moon

. "Pyramids / When The Poor Can Reach The Moon is the most ambitious song in the group’s entire catalogue, and one whose firm grasp of melody and dynamics more than justifies its length. The tension builds for a full five minutes until it arrives at its glorious, sun-drenched conclusion when, instead of violence and chaos, the gates to the mansion are flung open, guitars and pianos sparkle, the oppressed are liberated. The net effect is warm and rousing, speaking to the power of hope in the face of darkness. After three decades of near-misses and dark alleys, Phillipps has finally embraced his role as king of the underdogs. He fights back the only way he knows how: with beauty.” Pitchfork // Following the critical success of their comeback album 'Silver Bullets' out last year, The Chills deliver a bona fide Heavenly Pop Hit in the form of 'Pyramid / When The Poor Can Reach The Moon' taken from the same album. The Chills deliver up a plea on behalf of the displaced in a wryly observed commentary for our times and it's that rare thing, an insightful pop anthem with intelligence, heart and soul. “Pyramid/When The Poor Can Reach The Moon’ is a triumphant return to the 'Heavenly Pop Hit' glory days with a hook to rival 'Shiny Happy People'. B-side includes exclusive versions of ‘Night Of Chill Blue’ and ‘Walk On The Beach’ which were both recorded Karma Sound Studios in Bang Sarai Thailand in 2013. 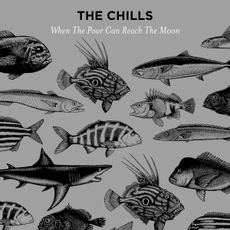