At Susanna’s eleventh album and first solo record since 2012 is a mastodon of a singer/songwriter release -- over 70 minutes of intensely expressive, deeply felt and spiritually probing lyrics, presented and performed in layers of voice, electronics, and effects, programmed with instruments like piano, violin and tuba.

The artist known for personal interpretations of songs by Joy Division, Leonard Cohen and AC/DC among others but also her strong originals, has dissected her own musical expression, collaborations and projects, including 2014’s ‘Meshes of Voice’ album with Jenny Hval, and put the pieces together again creating a unique and diverse world for her songs. Recorded in Oslo and Los Angeles, Triangle was composed, arranged, performed, recorded and produced by Susanna. Norwegian musicians, including Supersilent, Broen, Moskus, Splashgirl and Sudan Dudan participated, alongside Americans Alison Chesley (Helen Money) and Emmett Kelly (The Cairo Gang). Triangle re-examines Susanna’s relationship with spirituality, belief and superstition. Throughout, Susanna is in intimate, confessional mode, facing uncertainty and mystery, pondering how much of a place humanity deserves on a faltering planet, while confidently forging her own path and confronting doubt, fear and nihilism with a sense of wonder. Deeply Nordic in its willingness to confront existential darkness head-on, yet with a contemporary sound signature, Triangle is filled with magical omens, apocalyptic fires, black holes and floodwaters that constantly threaten oblivion. Yet among the dark undercurrents, electronic rumbling and white noise is a luminous melodic glow that rises above the introspection. Triangle is rich in allusions to religious rituals and magical practices, and the images (is it an angel? Is it a witch?) on its outer sleeve are the paintings East Angel and West Angel by LA based artist and occultist Cameron, a former star of Kenneth Anger’s films. 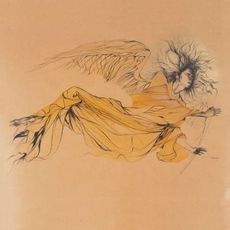