enormous, chaotic and clattering, transportive and druggy psychedelia sprawled across two sides of wax – blown out live up to their name.

Influenced heavily tonally al la Peace On The Mississippi/Crash Landing 3rd generation cassette culture, tight Grand Funk oblivion rhythm mind chemistry. Play High and Loud. Recommended for fans of Psychedelic rock, spaced out jams, Acid Mothers Temple, Bong, The Cosmic Dead, Les Rallizes Denudes, Earthless etc Features members of Pigs Pigs Pigs Pigs Pigs Pigs Pigs, Khünnt, Bong, HaiKai No Ku The album comprises of just the 2 tracks; 'New Cruiser' and 'Phase II', both of which exceed the quarter of an hour mark. 'New Cruiser' dives straight in with some deep, rolling bass, crashing drums and the trademark guitar from Vest. The track rolls and pitches along its way, based, as ever, on repetition (the bass of Hedley becomes positively hypnotic) while the guitar weaves heavy, reverb-drenched patterns in the sky. Blown Out have become masters of this - music that is heavy enough to affect the gravitational pull of nearby planets whilst still having the ability to mesmerise....the music that has you nodding whilst staring into the distance. This is what 'psychedelic' music is all about....not flowers and sugar cubes and paeans to long lost pastoral idylls, but music that can transport you. In Blown Out's case, that means a one way ticket to the far reaches of known space...with a huge shit-eating grin on yer face. If 'Phase II' may sound a tad familiar to some, that's because it is a reworked, longer version of the same on 'Celestial Sphere' . It continues pretty much where 'New Cruiser' left off...blistering, fuzzy wah-wah, jackhammer drums and undulating bass all coming together to create an Heironymous Bosch like vision of hell....Vest's guitar positively wails at times like some poor tormented denizen of the underworld. Like 'New Cruiser' it is the repetition that holds the power...for all of the freewheeling, freakout guitar, it has a structure and a form to which the rhythm section sticks rigidly. This is the less-than-secret ingredient in the Blown Out recipe..the tightness of form that allows a freedom of expression....sounds oxymoronic I know but without the drums/bass creating a framework the guitar of Vest would sound chaotic and functionless, but instead it sounds free but purposeful. In all, 'New Cruiser' is another unqualified success...guaranteed to scramble the brains and scare the neighbours...what's not to love. 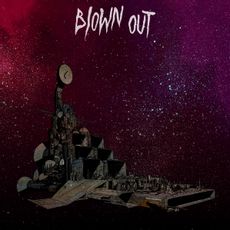