In 1991 TAD released their second full-length album and pushed their sound in new directions.

Not a band to rest on its laurels, they began to add melodic touches to their sound, as evidenced by the lead single, ‘Jinx’. This was the last record with the original TAD line-up, and their last album for Sub Pop before jumping to a major label. TAD was a mighty force in the late-‘80s/early-‘90s Seattle scene. Their heavy, churning rock/metal/punk buzz was a crucial part of Sub Pop’s early years, and, along with peers like Mudhoney, Nirvana, and Soundgarden, they defined the sound that reinvigorated the rock world in the early ‘90s. With an image that sometimes cast the band as deranged lumberjacks, and influence from Head of David and Killdozer, TAD put a uniquely rain-and-fog-coated Northwest spin on 80s underground rock. This reissue includes tracks from the ‘Jinx’ single, a 1990 EP, and a handful of unreleased album demos recorded by Jack Endino. 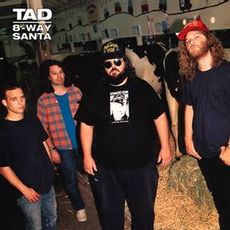