The ‘Levelling the Land’ special edition comes as a 2LP pressing, or 2CD & 1DVD set featuring the original album, plus a live version recorded at Brixton Academy and a DVD of that performance. ‘Levelling The Land’ was originally released in 1991 and features a string of hits: ‘One Way’, ‘15 Years’ and ‘Far From Home’ plus ‘The Game’, ‘Liberty Song’, ‘Another Man’s Cause’, ‘Riverflow’, ‘Boatman’ and the incendiary ‘Battle Of The Beanfield’. During that summer, ‘Levelling The Land’ redefined the UK’s musical landscape providing the soundtrack for a society fed up with the twin evils of Thatcherite politics, and the post-80’s pre-grunge musical landscape. 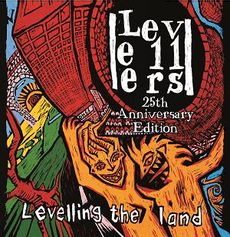