the veteran British songwriter and guitar sage has delivered a late-career masterwork in the form of his ‘american record’ – aptly titled ‘50’ to reflect five decades of recording and touring.

Chapman tears into both bold renderings of new songs and radical reinterpretations of material from his revered catalog, the crack band adeptly scaling the same rarefied sonic heights of classic Harvest albums, guided by a true survivor's instinct, wit, and wisdom. The result is a sublime self-portrait, more shadow than light, as an invigorated Chapman wrestles with weighty themes of travel, memory, mortality, and redemption, his world-weary whispers assuming the incandescent power of prophecy. A wonderful, unexpected surprise, then, that we can see appealing equally to fans of his peers like bert jansch and jack rose, and contemporaries such as ryler walker and steve gunn. A master guitarist and songwriter … The godfather of experimental rock guitar” – MOJO, “A world-class songwriter. Terrifically unpredictable … beyond any genre tag” - Pitchfork 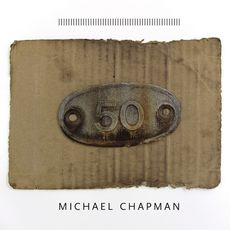