Between his steady release schedule of LPs, raucous side projects like Fuzz and GØGGS, and collaborations with fellow songwriters Mikal Cronin and Tim Presley, it’s as if a season can’t pass without Segall dropping a new record. And that’s not even taking his cassettes, splits, and EPs into consideration. Fortunately, Segall’s bottomless well of creativity, production savvy, and boundless fascination with the various niches of the rock world makes every new release an occasion to celebrate. Suicide Squeeze Records is proud to offer the latest entry in Ty’s impressive canon with the Sentimental Goblin 7”. Side A features “Pan”, a fuzz-soaked proto-metal jam that links Beatles’ pioneering guitar dirge “I Want You (She’s So Heavy)” to later lurch classics by Sir Lord Baltimore and Pentagram. In true Segall fashion, he switches gears on side B and conjures the erudite pop appeal of T. Rex and Bowie with the lush glam rocker “Black Magick”. Suicide Squeeze Records is proud to release Sentimental Goblin to the world on March 17, 2017. In a testament to his restless creativity and tireless work ethic, Ty also provides the artwork for the record. 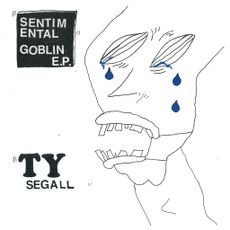