• Songwriting began in 1987, but due to the suicide of vocalist Per "Dead" Ohlin and the murder of guitarist Øystein "Euronymous" Aarseth, the album's release was delayed until May 1994. • De Mysteriis Dom Sathanas is widely considered one of the most influential black metal albums of all time. • FANTASTIC 140 GRAM PICTURE DISC VINYL • LIMITED EDITION 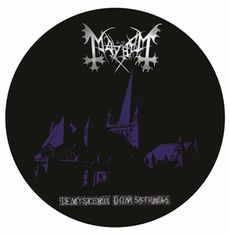