‘age of adz’ era sufjan fans this one’s for you – this ambitious, spellbinding and utterly intoxicating album manages to deliver a sound unlike anything else yet accessible enough to be instantly grabbing.

while it’s unafraid to go off into wild territories (you’ll find slivers of everything from yes style prog to emotive classical movements to flylo beats) by using a multitude of effects and pedals the four giants of modern composition and songwriting here manage to make a sound that bears all their hallmarks without becoming disjointed, which is nothing short of a miracle. there may not have been an album this cosmically spellbinding since sun ra…

Kevin recommends: “Pop this on and sit back to enjoy a spacey, proggy, sonic journey around the cosmos”

Juliet Recommends: “Sufjan Stevens – precious song boy. The Cosmos – literally out of this world. Combine the two plus more talented cast for some tasty tracks. More like planetariyum amirite"

“a head spinning musical tribute to the cosmos that might have awed even carl sagan” – 8/10, uncut 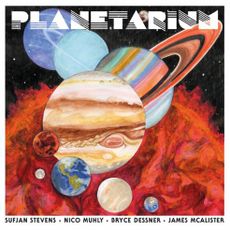