Our go-to record whether in the shop, playing out, or with friends round – these works are, without hyperbole, the creations of pure, inventive, otherworldly genius.

It may be somewhat cliché to claim music sounds like nothing else out there but in this case it’s completely true. Coltrane’s fusion of new age ethos, Indian timbre, her spiritual jazz background and gospel tones, make this body of work completely original. It’ll dissolve you into a hallucinatory, delirious trance, reaching a point of mellow euphoria. She founded and directed the Sai Anantam Ashram from 1983 until her death a decade ago. These tracks have been culled from 4 cassette only releases from the 80s and 90s and capture her at her most adventurous, working completely out of any form of restriction.

As we can’t profess to be experts on the life and works of Alice Coltrane, we’re probably best leaving the specifics of this release to the brilliantly knowledgeable folks at Luaka Bop, whose detailed information we have précised here:
“Alice Coltrane Turiyasangitananda’s devotion to spirituality was the central purpose of the final four decades of her life, an often-overlooked awakening that largely took shape during her four-year marriage to John Coltrane and after his 1967 death. [This is the] first-ever compilation of recordings from this period. This powerful, largely unheard body of work finds Alice singing for the first time in her recorded catalogue, which dates back to 1963, including appearances on six John Coltrane albums and 14 albums as bandleader, starting with her Impulse! debut in 1967, ‘A Monastic Trio.’ The songs featured here showcase a diverse array of recordings in addition to her first vocal work: solo performances on her harp, small ensembles, and a 24-piece vocal choir. The release is dotted with eastern percussion, synthesizers, organs and strings. Alice was inspired by Vedic devotional
songs from India and Nepal, adding her own music sensibility to the mix with original melodies and sophisticated song structures. She never lost her ability to draw from the bebop, blues and old-time spirituals of her Detroit youth, fusing a Western upbringing with Eastern classicism.” 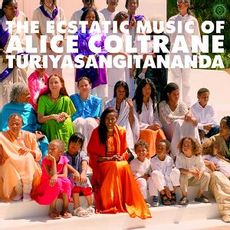