All the Berlin Period albums - from ‘Low’ to ‘Scary Monsters’ - this is without question the mercurial music icon’s most consistent and influential body of work.

Also included is the hard to find ‘Bertolt Brecht’s Baal’ EP, loads of alt versions and live stuff – a proper deep excavation of the period and all newly remastered. Exclusives here are the ‘Heroes’ EP, which rounds up the German and French album and single versions in one place to celebrate the 40th anniversary of the song + ‘Re:Call 3’, a new compilation featuring remastered contemporary single versions, non-album singles and b-sides and soundtrack songs.

containing a brand new remix of the 1979’s ‘LODGER’ by Tony Visconti, The box also features all of the material officially released by Bowie between 1977 & 1982 & an 84-page hardback book. It includes the ‘Berlin Trilogy’ of albums on which he collaborated with Visconti & Brian Eno as well as the ‘BAAL’ EP, & is closed by ‘SCARY MONSTERS (& Super Creeps)’. the set includes ‘LOW’, ‘HEROES’, ‘STAGE (ORIGINAL & 2017 VERSIONS)’ - the former is on yellow vinyl, replicating its original limited edition U.K. release, & the latter of which featuring two previously unreleased tracks, ‘LODGER’, ‘LODGER (Tony Visconti 2017 Mix)’, ‘SCARY MONSTERS (& Super Creeps)’, ‘RE:CALL 3’ (featuring contemporary single versions, non-album singles, b-sides & songs featured on soundtracks) & the ‘”HEROES”’ E.P., a compilation exclusive to the set celebrating the 40th anniversary of the song, which rounds up the German & French album & single versions of the track in one place for the first time. Also exclusive to this boxset is ‘Re:Call 3’, a new compilation featuring remastered contemporary single versions, non-album singles & b-sides, & songs featured on soundtracks. The box set’s accompanying 84p book features rarely seen & previously unpublished photos as well as historical press reviews & technical notes about the albums from producer Tony Visconti. 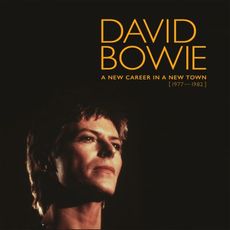 The running order for Re:Call 3 CD differs from the vinyl version