These two masters of film music have produced a score of particularly compelling stand-alone quality here, where light meets darkness and meditation meets movement on what the pair call “spiritual electronics”.

Military snares set a sharp cadence beneath the score’s eerie synths and strings, reminiscent of the texture of 2016’s amazing ‘Skeleton Tree’, and the ‘Hell Or High Water’ score. that said this is somewhat atypical in feel to the pair’s other film work, with the hand of others offering subtle deviations, such as kosmische master Roedelius, who contributes four movements. Cave and Ellis are calling this their favourite soundtrack work, and who are we to argue? “’War Machine’ doesn’t sound like a typical Cave and Ellis score. It feels like they’ve fallen back in love with not only music, but scoring films. Every track feels epic, but understated at the same time…their twelfth score and arguably their best.” 8/10 – drowned in sound 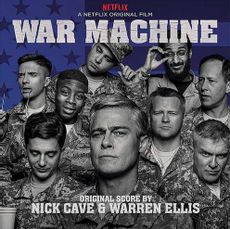