COLOURS OF THE NIGHT


a sensually intoxicating collection of blues-tinged traditional Moroccan music that speaks to the greatness of this man’s mind and musicianship.

these are the final studio recordings of deep, hypnotic Gnawa trance music from the late, great Maalem Mahmoud Gania. he was one of Morocco's most famous Gnawa musicians. Gnawa is a musical and spiritual tradition originating in sub-Saharan Africa that has survived as a subculture within Moroccan society for centuries. The roots of the blues can be heard in its hypnotic rhythms. A well-respected singer and master guimbri player renowned for his command of the Gnawa songbook, he became one of Morocco's most prolific recording musicians. From the 1970s until his death in 2015 he released numerous albums, as well as recording with Western musicians such as Pharoah Sanders, Peter Brotzmann, and most recently James Holden and Floating Points. 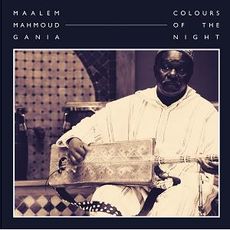