these tracks come from a series of sessions at king tubby’s in which they went dub-mad and produced some of the most outlandish cuts of niney’s career.

in 1973, niney took some of his tapes along to king tubby and even recorded some of his tracks at Tubby’s house in Kingston, which doubles as his Studio of Dub. Tubby would strip the tracks back to the bone and rebuild them, sometimes leaving off the hook line, Whether that be the horn line or keyboard line and adding effects over the top that could disguise the cut even more. It’s these tracks as dub plate specials that Tubby would play on his Hometown HI-FI Sound System and it’s these such tracks that have been compiled for this release. 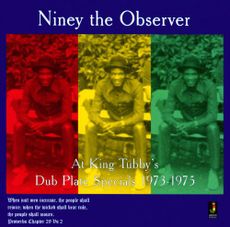