this Digitally remastered reissue includes the whole concert, & is augmented by studio sessions & rehearsal tapes from 1987 that preceded their classic ‘Playing With Fire’ album.

‘Spacemen Jam,’ featuring Sonic Boom & Jason Pierce on dual guitar, is a side-long mediation on delicate textures & psychedelic effects. August 1988: Spacemen 3 embark on one of the strangest events in the band's already strange history. the group would play in the foyer of Watermans Arts Centre in Brentford, Middlesex to a largely unsuspecting & unsympathetic audience waiting to take their seats for Wim Wenders' film ‘Wings of Desire’. the proceeding set, forty-five minutes of repetitive drone-like guitar riffs, could be seen as the "Sweet Sister Ray" of '80s Britain. Their signature sound is at once recognisable & disorienting – pointing as much to the hypnotic minimalism of La Monte Young as to a future shoegaze constituency. 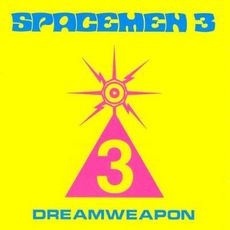