this is the kit

Wriggle Out The Restless (RSD18)


This Is The Kit have had a banner year, with their Rough Trade Records debut "Moonshine Freeze" becoming BBC 6 Music's most played record of 2017, and making it onto  numerous other year-end Top 10 lists.

It also found them doing their most extensive touring to date — both in the UK and abroad, including extensive support dates in London & North America with indie rock kingmakers The National. ‘Wriggle Out The Restless’ was This Is The Kit's first breakout release — 6 Music host Guy Garvey said "it should have been nominated for the Mercury Prize." — and this is its first time on vinyl in over a decade. (It was pressed in a limited edition of 500 copies with an alternative cover in 2010). Includes download code. 700 coloured vinyl limited edition (splatter orange + blue). Features exclusive track never before on vinyl ‘Treehouse’ as well as fan favorite ‘Earthquake’. “Absolutely gorgeous, like an aural bath with the warm water lapping over you” - Cerys Matthew / BBC Radio 6 Music. 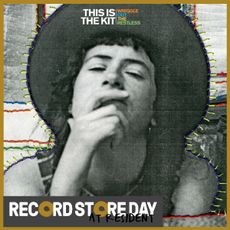