After getting into our heads with their catchy EPs, the Melbourne quintet have bottled the tension between their sunny optimism and melancholy undertones, uncorking this insta-hit of a debut.

‘Hope Downs’ has been glued to the stereo since release and is showing no sign of giving up its regular spot any time soon. It’s an album that could easily serve as a singles collection yet it works beautifully as a coherent, free-flowing full-length. Dangerously addictive and brimming with non-linear tunes, they’ve hit a glorious sweet spot between the angular edges of New Zealand’s Flying Nun Records (The Clean, The Chills) and the melodicism of the indie underground of their homeland, particularly godfathers, The Go-Betweens. Let’s be honest – many before them have been compared to Robert Forster and Grant McLennan’s legendary bounteous melodies - but RCBF are probably the only ones we’ve ever heard that are worthy of the comparison.

Too many jangly indie-pop records breeze their way pleasantly through your head leaving no lasting impression, failing to draw you back or stake their claim on your musical consciousness. RCBF’s delivery may hurry along giddily but their impact certainly isn’t fleeting. There’s a lot going on in these rich and weighty melodies but there’s something in the looseness of the song structures that evokes the wide-open space of Australia. Just as The Velvet Underground epitomise and define the sound of 70s New York, Rolling Blackouts are the sound of the land down under.

Having said all this, there’s an obvious affinity here with the Philly scene too. ‘Hope Downs’ could so easily be a missing point in the evolution of The War On Drugs. The interplay between the guitars, the motorik chug and the drum patterns - if WOD hadn’t gone stadium-Springsteen after ‘Slave Ambient’, this is where they could have gone. Whereas WOD take an idea and stretch it out to the max, RBCF distil it down to its pure essence. Nowhere is this more apparent than on opener, ‘An Air Conditioned Man’.

Elsewhere, the chiming jangle, guitar arrangements and half-sung / half-spoken vocals recall Television’s ‘Marquee Moon’ (‘The Hammer’), ‘Mainland’ works the same summery vibes that Real Estate have mastered, ‘Talking Straight’ is the song Traams needed to deliver to win over the 6music daytime audience and throughout, there are heavy nods to ‘Murmur’ and ‘Reckoning’-era R.E.M. There’s a sense throughout that although the record is clearly rooted in its environs, it’s simultaneously going somewhere – a band that want to represent their surroundings whilst also striving to transcend them.

A record that’s made for the road – full of possibility and optimism – driving into the future.

“Hope Downs is as good a reminder as any that life’s a blast. Head to the beach, you’ve found the soundtrack” 8/10 – the skinny 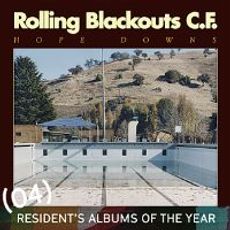