this great release couples perry’s spaghetti western-inspired instrumental album with the record made famous by the uk hit, ‘return of django’.

in 1968 Lee ‘Scratch’ Perry hit the big time when the mesmeric sax-led rock steady instrumental, ‘Return Of Django’ made number 5 in the UK charts. Soon after, Trojan released a hugely popular collection of the producer’s finest instrumentals to date. Perry remained at the cutting edge of the reggae scene throughout the months that immediately followed, with tracks by the Upsetters proving particularly popular among both Jamaican and British music fans. In response, Trojan issued a second Spaghetti Western theme instrumental-based album comprising the enigmatic Jamaican’s work which further demonstrated his increasingly bold and innovative approach to music making. this is a must for all fans of both the producer and vintage reggae sounds. 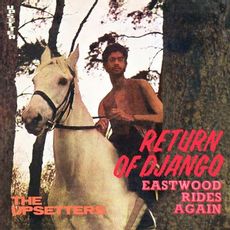