What We Did On Our Saturday


recorded at their 50th anniversary concert on 12th august 2017, this set encompasses the band’s entire history; a must for old fans and an excellent entry point for newcomers.

Recorded at their own annual festival at Cropredy in North Oxfordshire, this is a celebration of the founders of the British Folk-Rock genre, Fairport Convention. The current line-up are joined on these 25 tracks by former ‘Fairporters’ Richard Thompson, Dave Mattackes, Iain Matthews, Julie Dyble, Maartin Allcock and Ashley Hutchings, ably assisted by their friends Ralph McTell, Sally Barker, Chris While and PJ Wright. 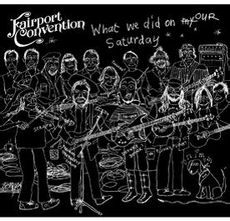