big, fuzzy riffs adorn this exhilarating, stompy record from Alan Sparhawk’s (low) garage blues project, blending the euphoric infectiousness of the black keys with the wigged out, speaker-filling sprawls of all them witches.

Since their formation in 1999, Their shows have demonstrated a chaotic, swirling cacophony, based on the most primitive elements of electric blues and punk. ‘seven horses’ is the culmination of a simple but visceral path cut with blood, sweat, loud guitars, and dancing. Singer/guitarist Alan Sparhawk, who is also in the band Low, howls through the squelch and bash, sometimes to rally the congregation as on "Church Song" and sometimes the voice of pleading despair as on "Don't Kick Me Out." 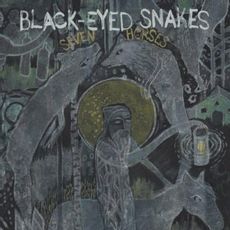