a superb performance of John Renbourn at the height of his powers & in a deeply intimate setting, as well as a further demonstration that the work we do in this life can linger far beyond our lifespan.

An evening in a coffee house in Kyoto forty years ago has lingered fondly in the memories of those who were there. His repertoire, by this point, was vast & among the songs he played on this night at the Jittoku coffee house were pieces by Reverend Gary Davis, Davey Graham, Mississippi Fred McDowell, Arthur Smith, William Byrd & Charles Lloyd. The recording was made by Satoro Fujii, whose archive of recordings was discovered posthumously. Satoro captured the performance with pristine detail, allowing us to hear the fine detail of John’s fretwork & the warmth & delight in the room as he played. 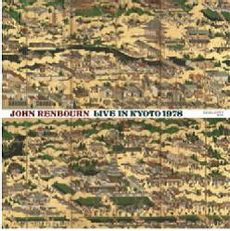