”Paul Carrack returns with a brand new studio album and is ready to reach new heights with ‘These Days.

’ It’s Paul’s 17th album , a run that began way back in 1980, but which has been building real, independent momentum since he formed his own Carrack-UK label in 2000 with the landmark ‘Satisfy My Soul’ release. Since the turn of the century, Paul has quietly built a huge, loyal fan base, the audience that not only devours his albums, but turns out to see his frequent, extensive tours in their thousands. He’s done that the only way he knows, by making high-quality, accessible pop-soul with unmissable hooks and lyrics that say something about all of our lives. That’s more true than ever on ‘These Days.’ The album’s stunning line-up features Paul on keyboards and guitar and regular bandmate Jeremy Meek on bass, joined by Robbie McIntosh (Paul McCartney, Pretenders, Norah Jones, John Mayer) on lead guitar and drummer Steve Gadd, Paul’s Eric Clapton bandmate who has graced the work of everyone from Steely Dan to James Taylor. As if their exemplary playing wasn’t enough, the album’s horn section is handpicked and overseen by the mighty Pee Wee Ellis, the American saxophone ace who was an integral part of James Brown’s shows and records of the vintage ‘Cold Sweat’ era. Five tracks on ‘These Days’ have lyrics by Paul’s friend, former Squeeze bandmate and consummate wordsmith Chris Difford.” 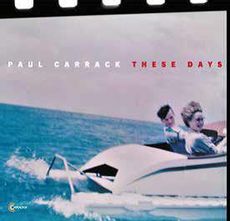