the Montreal-based producer’s fourth & most self-reflective record continues to harness aspects of Italo Disco, proto-industrial & electronica, but leadens them with a gut-punching weight, making for a record that’s more visceral than any she’s released before.

Industrial heaviness is balanced by Davidson’s spoken text – rather than spoken word, which she sees as a distinct tradition – dark, textured soundscapes are counterweighted by statements that carry a more darkly humorous edge than before, making observations on both aspects of club culture as well as more oblique critiques of the modern world. Fans of Helena hauff, maribou state & gabe gurnsey should check this out. “an incredibly cohesive art-house album with a perfect combination of electronic music & spoken word, & if it doesn’t punch through the roof of clubs everywhere at least Davidson will be sorted as a kick-ass life coach” 5/5 – the skinny. 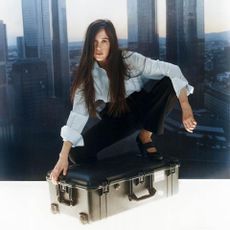