thom flexes his creative muscles wonderfully on this varied soundtrack that ranges between unsettling synth horror and beautiful melodic respites.

‘Suspiria’ consists of 25 original compositions written by Thom specifically for Luca Guadagnino’s reimagining of the 1977 Dario Argento horror classic. The album is a mix of instrumental score work, interstitial pieces and interludes, and more traditional song structures featuring Thom’s vocals. As scoring a horror film presented Thom with altogether new challenges and opportunities, ‘Suspiria’ stands apart from any of his other work. Piano/vocal ballads, Krautrock-esque modular synth work inspired by the film’s Berlin 1977 setting, multi-layered vocals, and melodies that convey terror, longing and melancholy combine to create a chaotic yet cohesive musical spell. “Thom Yorke’s finest work outside of Radiohead since ‘The Eraser’” – louder than war. 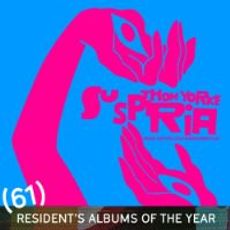