'Entertainment!' is one of those records where germs of influence can be traced through many genres & countless band.

Its vaguely funky rhythmic twitch, its pungent, pointillistic guitar stoccados & its spoken/shouted vocals have all been picked up by many. Lyrically, the album was apart from many of the day & it still is. Though the brilliance of the record thrives on the faster material - especially the febrile first side - a true highlight amongst highlights is the closing 'Anthrax', full of barely controlled feedback squalls & moans. It's nearly psychedelic, something post-punk & new wave were never known for. With a slight death rattle & plodding bass rumble, Jon King equates love with disease & admits to feeling "like a beetle on its back." In the background, Andy Gill speaks in monotone of why Gang of Four doesn't do love songs. Subversive records of any ilk don't get any stronger, influential, or exciting than this. 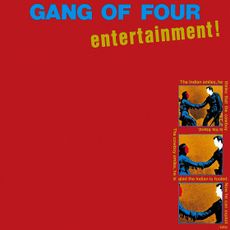