the boom in Power Pop and New Wave which followed the Punk explosion in 1977 is comprehensively captured here over 3 cds.

The British scene’s reiteration of the appeal of a more traditional pop approach saw several attempts to provide an alternative to the unsatisfactory ‘New Wave’ epithet. But none of these terms caught on, and instead the genre became known as Power Pop. ‘harmony in my head’ includes many of the scene’s biggest hitters including Elvis Costello, Squeeze, Buzzcocks, Eddie & The Hot Rods, Nick Lowe, The Jags and Wreckless Eric. They are joined by other less successful but nevertheless key players (The Records, The Freshies, The Flys etc) as well as a host of rare 45 tracks, which have never been on CD before. The deluxe package includes a weighty booklet with a 12,000-word sleeve-note incorporating band-by-band biographies by compiler David Wells. 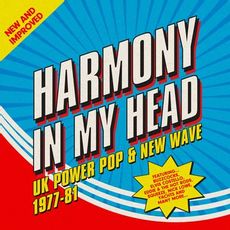