‘Construction Time Again’ marked the first time that Depeche Mode released limited edition versions of an album's 12" singles, each containing the original mix of each track. With this and ‘Some Great Reward’, Depeche Mode's commitment to the 12" single format as a distinct art form became even more evident. The set includes three reproductions of limited singles which each feature four bonus live performances recorded at London's Hammersmith Odeon on October 25, 1982. The artwork for the exterior of each of the new box sets draws on street art iconography inspired by the original releases, while the vinyl sleeves themselves feature the original single artwork. 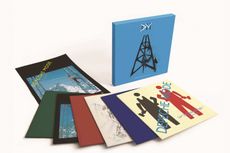