Though their shtick is no longer shocking, the ‘mods revel in being the well established nihilistic voice of Britain, exploring the absurdity of it all with a sonic restraint that suits them.

their fifth album sounds resigned and menacing, capturing the feeling of being trapped in the holding pattern of the contemporary moment. There are surprises here, like the half-sung, almost-lament of ‘when you come up’, which when they come, worm their way into your psyche with troubling alacrity. This band are not interested in making you happy or entertaining you with cheap thrills, and this is how they stay vital. “in ‘Eton Alive’ they have delivered one of their strongest records so far; a hellfire missive thrown down by a band still very much at the peak of their powers.” 8/10 – loud and quiet, "This is music that stands in opposition to the slick capitalist aesthetics of automation, the internet and political jargon." – the wire magazine 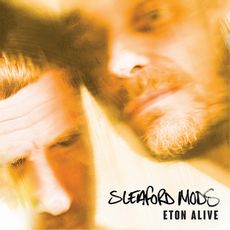