Once Upon A Time Music


In 1994 Julian Cope released his eleventh solo album Autogeddon. Now we present the 25th anniversary deluxe editions with rare bonus material and a newly written book, which contextualises this underground masterpiece for the first time.

Celebrating it’s 25th anniversary this year and inspired by Heathcote Williams’ poem of the same name, Autogeddon is largely a diatribe against car culture. As recounted by Julian in the American Records biography:

“My wife and I were walking along near Covent Garden. Just as we were crossing the street, out of the corner of my eye I saw this yellow Ferrari Testarossa.  They only make three of these a year in yellow – it’s like –  ‘not only have I got money, but I’ve got yellow money so I need to flaunt it. And it went past – ZOOM – and just missed my wife. I thought, ‘that was really close, what’s that about? Tense asshole with all that money.’ I suddenly realized that he’d gone down a one-way street, so I started walking. I didn’t know what I was going to do, I just thought I’d go check this guy out and see what his problem was.I came round the corner and, parked outside this sandwich shop was the yellow Ferrari. So I just stood in front of it with my legs against it and started rocking it. Then I walked back 50 yards or so to this building site and heaved up this big bag of industrial rubble, and jerked it very, very slowly along the street. I finally got it in front of the Ferrari and, well I didn’t throw the bag, I just tossed the rubble all over the car, and it fell almost slow motion all over the front of this car. I thought, ‘fuckin’ hell, what have I done?’ All these people were looking at me and I just legged it. That was really the start.”

Autogeddon concludes a trilogy of started by Peggy Suicide and Jehovahkill, it showcases Cope’s continuing focus on heathen religious practices and ancient monuments 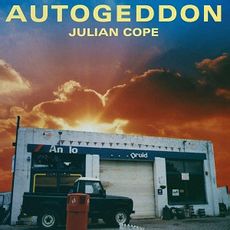 1. With The Leone Quartet

6. Paranormal In The West Country

Paranormal In The West Country 12”:

1. With The Leone Quartet