Don’t You Think You’ve Had Enough


their first album created in a state of deliberate sobriety, this is the sisters’ most focused record to date; a delectable hit of sugary pop-punk that serves up a generous portion of stadium-friendly choruses on a jagged spoon.

Their newfound perspective serves as the guiding force, yielding a courageous, honest, and sonically ambitious album. The resulting LP is explosive, grappling with the past; its twelve tracks mark some of the sisters’ most visceral, rawest songwriting to date -- and some of their best. The work glimmers with inspiration found in touring with the likes of The Damned and Paramore. That arena-ready pop, incisively catchy, was a palpable influence helping to push Bleached’s sound in a new direction. Fans of the breeders, sleater-kinney, cherry glazerr and the coathangers will love it! 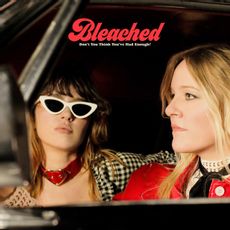