Released in 1971, GET CARTER all but defined a new breed of gritty British gangster film, portraying career criminals in a more brutal yet three-dimensional fashion (a style later adopted to great effect by TV series The Sweeney).

Directed by Mike Hodges and starring Michael Caine, the film has grown in stature over the years – fuelled in great part by the amazing soundtrack by British jazz maestro Roy Budd. From the opening bars of the ‘Get Carter’ theme, the music underpins the tense drama, endorsing an atmosphere which was both thoroughly British while also reflecting the more sophisticated urban landscapes portrayed in ground-breaking US films like The French Connection. While the ‘Get Carter’ theme was issued as a 7” on Pye Records (Roy Budd’s label at the time), the original soundtrack LP was only released in Japan on the Odeon label at the time. As the film’s legendary status grew, the soundtrack was finally gifted a UK release in 1998 on the Cinephile label and the theme was widely sampled and used for the likes of TV adverts. This new and improved edition of GET CARTER offers three CDs of music from Roy Budd – the first two devoted to the film’s soundtrack and the third to the best of Roy Budd’s other scores. Disc 1 re-presents the original Japanese soundtrack, with the addition of ‘Hallucinations’ (which graced the soundtrack but not the LP). Disc 2 combines other incidental music from the film with single mixes and remixes and other rarities. And you can hear soundtrack highlights from the likes of Diamonds, Fear Is The Key, The Stone Killer and The Black Windmill on Disc 3. This triple-CD package is presented in a deluxe hardback book format with a huge booklet boasting a new, 15,000 essay from film soundtrack writer Charlie Brigden and a foreword from Paul Fishman, as well as numerous images from this most iconic of movies. 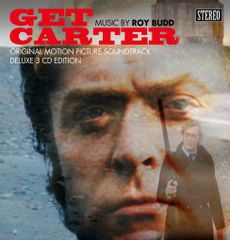