The Living End is a Hüsker Dü live album recorded at various venues in October 1987, but not released until 1994.

It spans the band’s entire recorded output, from “Data Control” off Land Speed Record, the band’s debut, to a healthy dose of songs from the band’s last studio album, Warehouse: Songs and Stories. There are also some unreleased tracks and a cover of the Ramones’ “Sheena Is A Punk Rocker.” guitarist Bob Mould and drummer Grant Hart handled the overwhelming share of songwriting duties in the band. Of interest is “Everytime,” a rare solo credit for bassist Greg Norton. The track listing is reflective of the band’s set lists. “New Day Rising” was a common choice to open shows. As explained in the liner notes, the band preferred to group like-minded songs into what they called “packs of three.” Examples of these “packs” include “Standing in the Rain” followed by “Back from Somewhere” and “Ice Cold Ice,” as well as “Terms of Psychic Warfare” followed by “Powerline” and “Books About UFOs”. 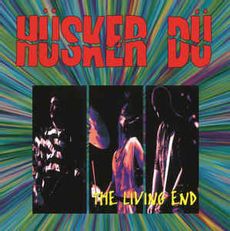