Back by popular demand for its 30th anniversary, the original soundtrack to Heathers from director Michael Lehmann with music by composer, David Newman.

A cult-classic in the truest sense of the term, (it grossed only 1 million at the box office), Heathers stars a 15-year-old Winona Ryder, who is enjoying a notable return of her own on the immensely popular Stranger Things series. Ryder’s agent at the time famously begged on her knees for Ryder to pass on the role. The dark comedy which pits a powerful high school clique against a murderous sociopath also features Christian Slater in one of his first major roles and a pre-Beverly Hills 90210, Shannen Doherty. 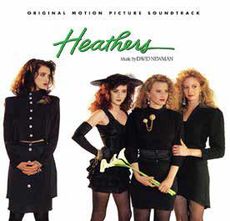