KERRANGGG!! – It’s not necessarily a sound associated with XTC per se but, with the twin guitar line-up now fully settled, relentless touring schedule & thoughts of recording with Lillywhite & Padgham in the studio where the same engineer/producer combo had established that drum sound, thinking of XTC in “rock band” terms was the ideal approach for the multitude of songs Partridge & Moulding were individually producing.

Preceded by a set of live demos at Phonogram studios, XTC knew exactly what it wanted from a fourth album – even down to the original album title: “Work Under Pressure” (which helps make more sense of the sleeve photo also), prior to setting foot in The Townhouse for the main recordings. The switch to “Black Sea” was made only to allay the then band manager’s sensitivity to the title being interpreted as a criticism of his management style. More Power Rock than Power Pop, when released in Sept. 1980, the album became XTC’s first Top 20 chart album in the UK, narrowly missed the Top 40 (No.41) in the USA where it was issued in November, but spent an impressive 24 weeks on the Billboard chart nonetheless. Generals And Majors & Towers Of London provided twin back to back Top 40 UK singles released either side of the album in a tight eight weeks’ release space in September & October, while Sgt. Rock propelled the band back into the UK top 20 in January 1981. The sense of immediacy, the rush of a band fully living up to its potential is as apparent now as it was when the album first came out. One of the best engineered & produced albums of the era, now restored to its vinyl origins, newly cut at Loud Mastering by Jason Mitchell & pressed on 200gram vinyl to satisfy the most demanding of audiophiles 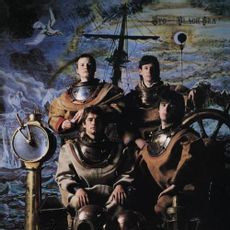