EVERYTHING BUT THE GIRL

.. raw, pure and absolutely gorgeous" - Rolling Stone. "The title track remains probably the single finest pop moment in the drum'n'bass canon" - Village Voice. "Walking Wounded draws on downtempo, drum 'n' bass, and trip-hop. On paper, compressing the wide open space of those then-nascent sounds into a pop format could’ve been a disaster. But words don't do justice to the emotional multiplicity — hurt but warm, worn but rich — of Thorn's voice, and how seamlessly she made a home for herself amid Watt's stark sonic architecture" – Pitchfork (2019 retrospective review) The record - first released in April 1996 by UK alt-pop duo Tracey Thorn and Ben Watt - debuted at #4 on the UK Album Chart and contains four UK Top 40 singles, including the Top 10 hits "Walking Wounded" and "Wrong," and set new a benchmark for the intersection of contemporary electronic music and smart pop songwriting. The album was programmed and produced by Watt in 1995 largely in the basement of the duo's north London home demo studio. "Just an Akai sampler, a computer, a synth and guitar, an inexpensive vocal mic, and an 8-track tape machine," he says of the process. "We were writing in reverse - mood first, then songs, learning and we went along. It just felt like a new frontier," adds Thorn. Producer John Coxon of the recently formed drum'n'bass-inspired duo Spring Heel Jack - and with whom the Watt and Thorn had worked on Amplified Heart - was invited to provide a backing track for the album's title song, and beats specialist Howie B worked on the groove for Flipside. The album was then mixed at The Townhouse in west London by Watt and young emerging engineer, Andy Bradfield. The new vinyl edition has been mastered by long-time Everything But The Girl mastering engineer, Miles Showell, now at Abbey Road Studios, who is one of only a handful of engineers specialising in half-speed mastering that uses new techniques to more faithfully reproduce the sound of original master tapes. 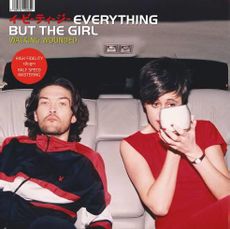